Well, we're already halfway through Enid Blyton April and due to my uselessness with photos, there's still a little bit of Marc Bolan March in this update. Whoops. 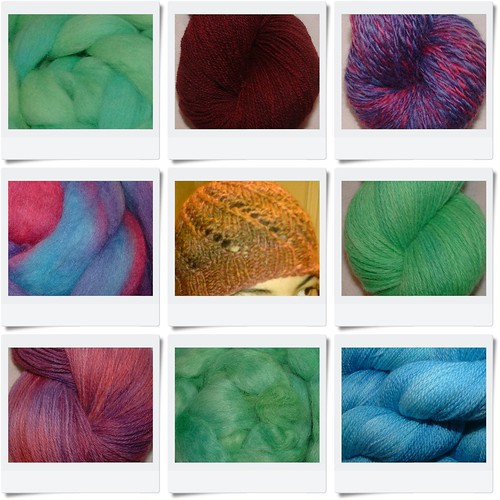 That hat in the middle is Kirrin and I'm still looking for test knitters. Leave a comment if you fancy giving it a go. Once I'm sure the pattern works I'll be giving it away with all my handspun. And other than that it's:

The BritLace is a new base yarn I'm trying out for the UK Ravelry day. And my usual sock yarn supplier's having some issues so I've switched to a 100% superwash wool base yarn for my standard sock yarn for a bit, which is lovely and soft.

Hanging up to dry I currently have Lashings of Ginger Beer (which is less ginger than I was expecting) and Midnight Feast. Tomorrow's supposed to be the hottest day so far this year, so hopefuly they'll dry outside OK and they'll be up by the end of the week.

Plans for the Manchester Yarn Collective is still underway - but we're looking for names still. Any suggestions are more than welcome.

Had a really nice Easter weekend. Friday we had planned to go to the beach with Anna and Kath but the weather was miserable. We went down to my mum's for Saturday night, via Charl's family to drop off baby's easter egg. He's speaking Russian. We took Charl's electric drum kit down so Josh could have a go and now he's decided that he wants to play the drums. I don't see it lasting which is a shame because he's really good. He just never sticks at anything - I guess I was the same at that age.

Case in point - I brought my guitar back up north with me from mum's. I had a phase of trying to play when I was 13-14-15 but I never managed anything recognisible so I gave up with it and it's been sat in the bedroom at mum's gathering dust for 8 years. In the past few weeks I've been playing about with Charl's guitars (and hardly spinning at all by the way) and have rediscovered my interest. I still can't play bar chords, but I'm improving. I can manage a pretty decent rendition of Little Baby Nothing by the Manics anyway. And I can play a Dm which is The Chord of Catatonia. And I can do Me by Easyworld. I have also discovered that it genuinely was the fault of my guitar for the most part. I can play loads more on Charl's guitars than on mine - although I think Me sounds better on mine. It's like the difference between my antique wheel (which does an amazing semiwoolen 2ply DK but not much else) and my Rose.

Next step - an F. Without cheating. If I can do longdraw I can do anything, right?

Sunday at mum's we had a little easter egg hunt for the kids. After about 20 minutes we switched from chocolate eggs to grapes and they preferred the grapes. Kids these days - I just don't understand them at all.

Yesterday we went out to my cousin's to pick up her cat, who has come to live with us because baby and cat were not mixing so well. She seems to be settling in OK. She's a little bit miffed-looking but I think she always looks like that!

Oh and if there are any typos here, I'm sorry. Sabbath had a bit of a random freak-out last night, threw himself across the laptop and took half the keys with him. I can still type, but there are these silly little rubber bumps instead of keys.
Collapse