There is pretty much nothing white left in the house. It keeps finding its way to the kitchen and coming out another colour. Even though March is Marc Bolan Month, and I'm determined to come out with something called 'Ride a White Swan'. Whoops. Maybe I could just do something the same colour as this album sleeve.

I've been plying up what was a one-ply laceweight yarn to make a lovely sock yarn. It's slightly skinny (500yds in 100g, where GEM Sock is 400yds) but it's so soft and it takes dye brilliantly. I'm dyeing it up in solid/semi-solid colourways, so it'll be useable for lace work too. Unfortunately, I won't be able to get any more of it ever, so there'll only be about 6 skeins. This makes me sad, because this stuff is just dreamy.

This is how it looked before it was dyed. 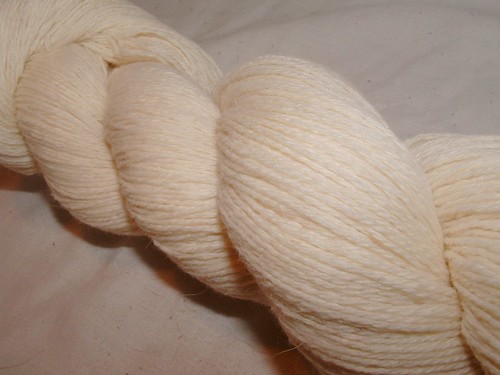 Dyed-up pictures after my weekly Friday photo session. I promise.

Work is progressing slowly on the Tigger socks because I've started on a new handspun lace shawl. I have a bit of a handspun lace addiction. It's just so much fun from beginning to end. But once I get to the end of the first lace section, and I've proven to myself that I can do it, I'm going to be moving on to Decimal. I absolutely fell in love with this when I saw it and I don't think I can live without one. Though...it's knit on 3.5mm needles. A whole cardigan. In my size. On 3.5s. Fear.

Oh, and since I've been so slack with the blog, here's just a little sneaky peek at this week's shop update. 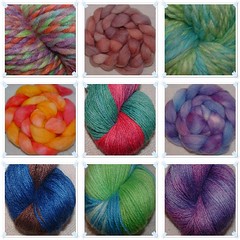 I keep thinking that I've been doing nothing, but then when I think about it, I've been decently busy. On Sunday Gill & Neil came up and we went for a nice pub lunch. And then Monday Katie, Kath and I braved Belle Vue and hit the showcase for the Giant Blue Wang film, which was a lot of fun. I feel the need to comment about the comfiness of the seats, but then I realise that I'm not yet 40. Must make it a semi-regular thing. Perhaps Lesbian Vampire Killers next.

Last night was 8th Day knitting - went a little early and had lunch in All Saints Park. There was this giant yellow ball thing in the sky which was making things warm. Very strange. Knitting itself was nice - Britt came for the first time in ages, and she's made the cutest baby stuff for her bump. Yay for having a girl to knit for - everyone I know keeps insisting on having boys! Amy, Julia, Moya, Kate, Steph...all had boys! There are only so many little knitted vests one girl can cope with.

I've been spending far too much time on Etsy lately, lusting after things I can't have. My favourites this week are...

Please. Buy them so that I can't.
Collapse