Would there be Pimms?

Dyeing is still going swimmingly here at Bork Towers. My Winghams order finally arrived, so I've dyed up some organic merino, using the natural dyeing know-how I gained the other week.

Purdy, no? The only issue is that natural dye is a pain in the bum to rinse out, so there's still a little bit of residual dye in there - I didn't want to rinse too hard in case I felted the roving.

Oh, and I managed to get green without having a natural green dye! Go me. It was a bit dull, so I gave it an improvised alkali bath which - not that you can tell from this photo - has brightened it up no end. 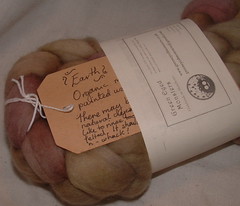 I also got some organic merino sock yarn this week, which I'm going to give the same treatment. Probably the same colours too. I'm such a sucker for purple.

I got some lovely baby alpaca in the same shipment. And when I say lovely I mean to die for. It's sock weight, but would be perfect for shawls and stuff too. I've dyed some up for the shop, but I may well be keeping the rest for myself!

This little lot is off to Carole at Skeins tomorrow. Though it keeps looking at me. Smoosh smoosh smoosh. 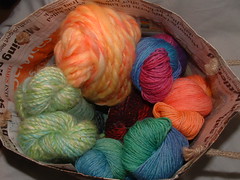 What else? Oh yeah, there's some more squirrel due to go into the store this week:

And some GEM sock... 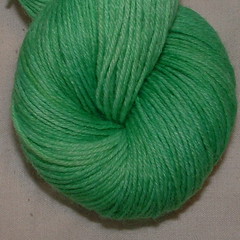 And even some handspun.

My swap package for the UK Spinners Swap on Ravelry is all ready to go now. There's some of the GEM Earth roving, the 50:50 is from FluffnStuff and it is seriously lush. 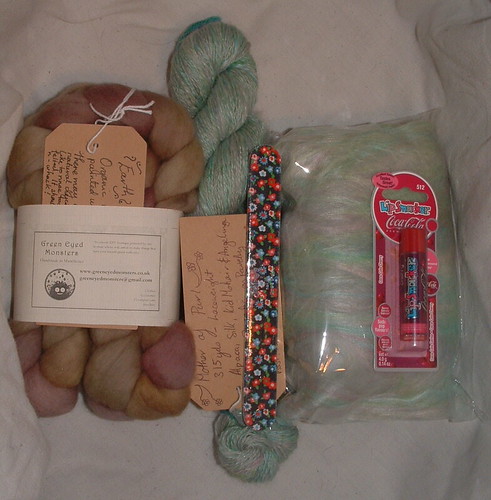 Well, that's quite enough of the fluffy stuff.

In other news, yesterday was Rise Against. Nomworthy as ever. It was pretty bizarre seeing them at the Academy 1. It seems like it was only about three weeks ago that we saw them at the Academy 3. It wasn't quite so long that it was still the Hop & Rape, but still...

Anyway, yeah. They were damn good. But I had a bit of an epic fail and had to run away. Grr. We were about 3 rows from the front. I don't think I've ever done that before. I've always prided myself on my ability to withstand the crushiest of crushes. So we watched the last 20 minutes from the side.

"If there's one thing this band doesn't believe in, it's bailouts for bankers. We believe in bailouts for the poor, for students, for the working class!"

Like...don't get me wrong, I'm all for solidarity with the proletariat, but dude...some middle-class kids need more beer money? That's serious. We better do something about that.

Finally...I have given in to twitter. Come find me. It's kathleenalice for a change.